Ethics and diversity; these are the pillars that sustain the co-creation of the future which will make us stay far from frightful futures such as “Black Mirror”, and allow us to understand that the future is always a possibility and can be desirable.

During the three-day Designing Desirable Futures course, I did not take away only tools and fundamental knowledge to approach the future possibilities in my projects, career, daily activities and personal life; the course also allowed me to remove the “past-lensed glasses” and see the world as a prototype that can be improved by all of us. 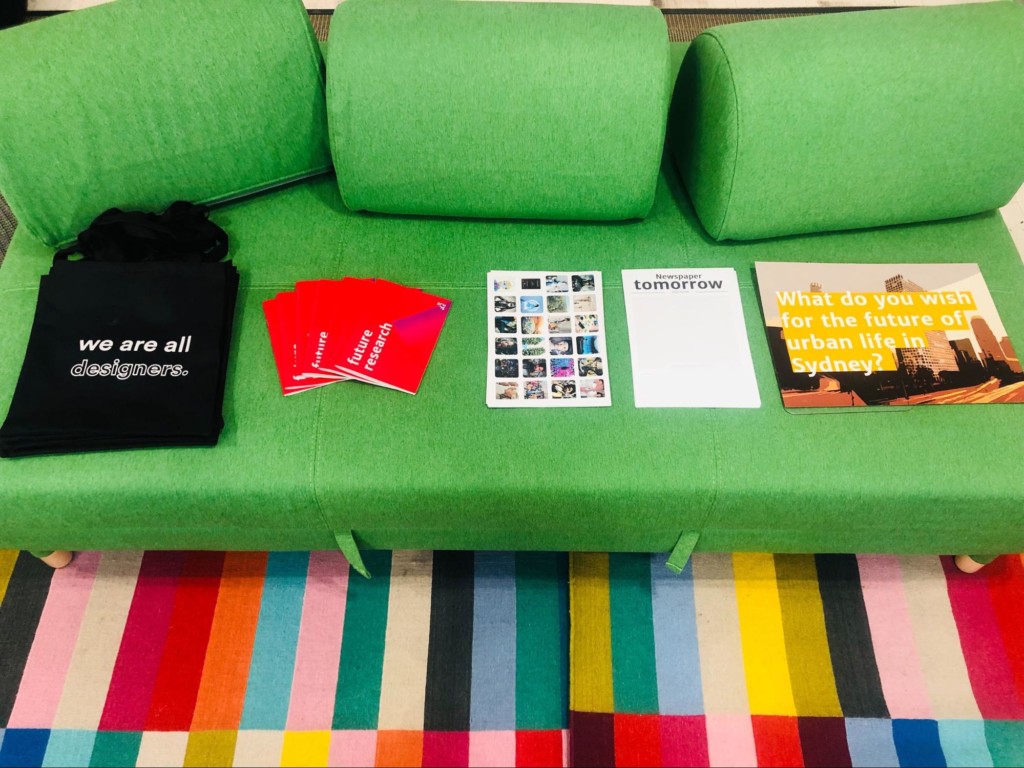 Day one started with us writing a letter as if we were in 2030. The letter was a message to the past, so I wrote:

“Hey Yago, things are going well here. I’m writing this letter to make you calmer, nowadays the machines are producing most of the things we need, and we have more time to enjoy life which is much easier and luxurious than in your time.” 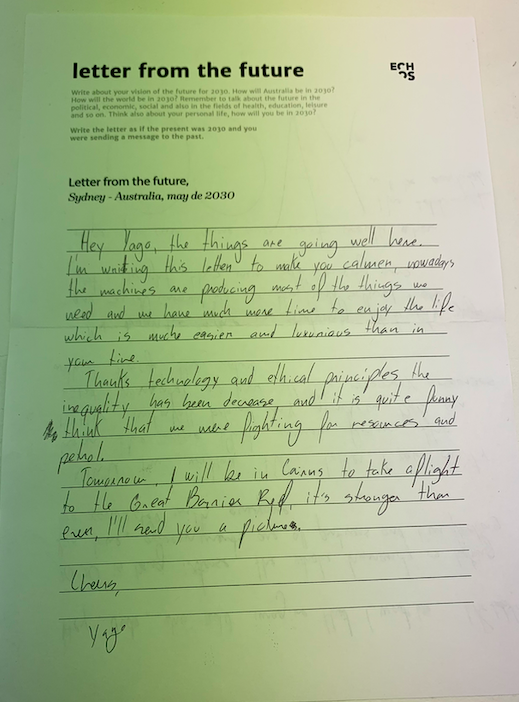 My letter from the future.

Right after the letter, we had a bit of theory. First, the Designer Thinker and facilitator Juliana Proserpio showed us the power of design and how we can use it to influence the future. Through a few case studies, we realised that in the future, the protagonist might be either technology or human and both scenarios can coexist depending on the situation.

After seeing what is already happening through a desk research session, it was clear that we need to be attentive to the weak signals which are easily found in the fringe of society – and where we are not usually looking at. To speculate and create alternatives for the future, each of the groups designed an artefact of the future without judging if it was financially viable or feasible. I must confess that I was struggling to create something really innovative and to not fall into the same trap as the artists in En L’An 2000 that designed gadgets with a tremendous lot of technology but continued to behave as if they were in the past. 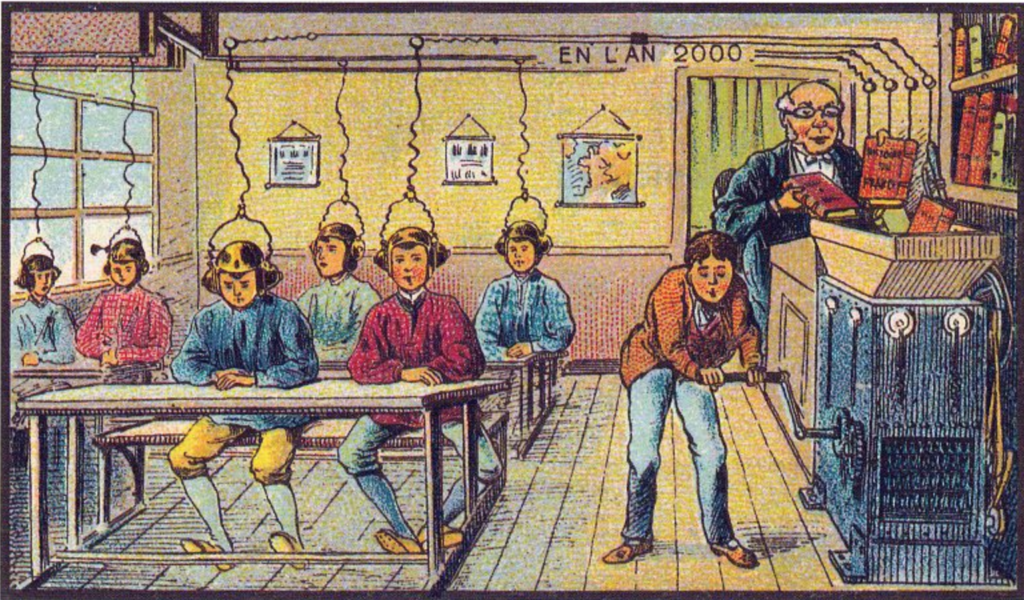 In the image above we can see a high tech device that is supposed to synthesise the knowledge and make the learning experience easier and faster. However, where are the women in that class? Also, the classroom still is teacher-oriented. If the creation doesn’t change our behaviour, can we consider it an innovation?

Day two started, and I could feel that all the groups were silently questioning: “Where are we going?”. We did not know, but we would get the answer soon.

It was time to get our hands dirty, so after an in-depth conversation about how our past experiences and biases influence us, Juliana gave us a challenge: “What would be Sydney’s urban life’s desirable future by 2038?”.

We went to the streets to figure it out and do field research. We were not looking at the mainstream places; we were looking for contradictions, rarities and extreme behaviours. Known as one of the coolest suburbs in Sydney, the destination was revealed to be Newtown, a place where we knew we could find contrasts and weak signals in the fringes of society.

We had so much fun working in pairs; we interviewed several people with different ages, points of view and realities: some people were homeless, retired, merchants and students. In order to discuss and organise our discoveries, we went to “Lentil As Anything”, a restaurant which places people over profit, with a pay-as-you-feel system. Their team is committed to feeding and connecting the community while encouraging environmental sustainability. Is it a weak signal? I hope so.

The future must be distributed, so we went to the Sydney CBD to finish the research; we observed and interviewed people who live and work in the city. With a blank sheet, we asked people to draw (literally) their ideal future in Sydney. Aside from the expected complaints about traffic, cost of living and shops closing too early, the response pattern that most shocked me was the lack of connection in the community. After a long day on the streets, my mind was restless, and I just could think about the answers I heard during the day.

As the activities kicked off on last day, I was anxious to see what we would create. On the other hand, I was lamenting as I knew the course was finishing.

In the morning, we had a session to talk about exponential technologies – as the geek I am, I could not be more excited. After that, to illustrate how to develop a real project, Juliana showed us Echos’ case studies and, through these examples, I understood that to create the future is to create narratives, so that what we did.

After two days of analysing social needs, identifying emergencies of the future, exercising future alternatives, it was time to set our intention and create a vision of the future. As a group, we made a video that was our MVF (Minimum Viable Future), which we believed could be the answer for our challenge: What is the desirable future for urban life in Sydney by 2038?

A backward action plan helped us clarify the steps we should take to achieve our desired future, and for the first time, I feel that it is possible to create the future. 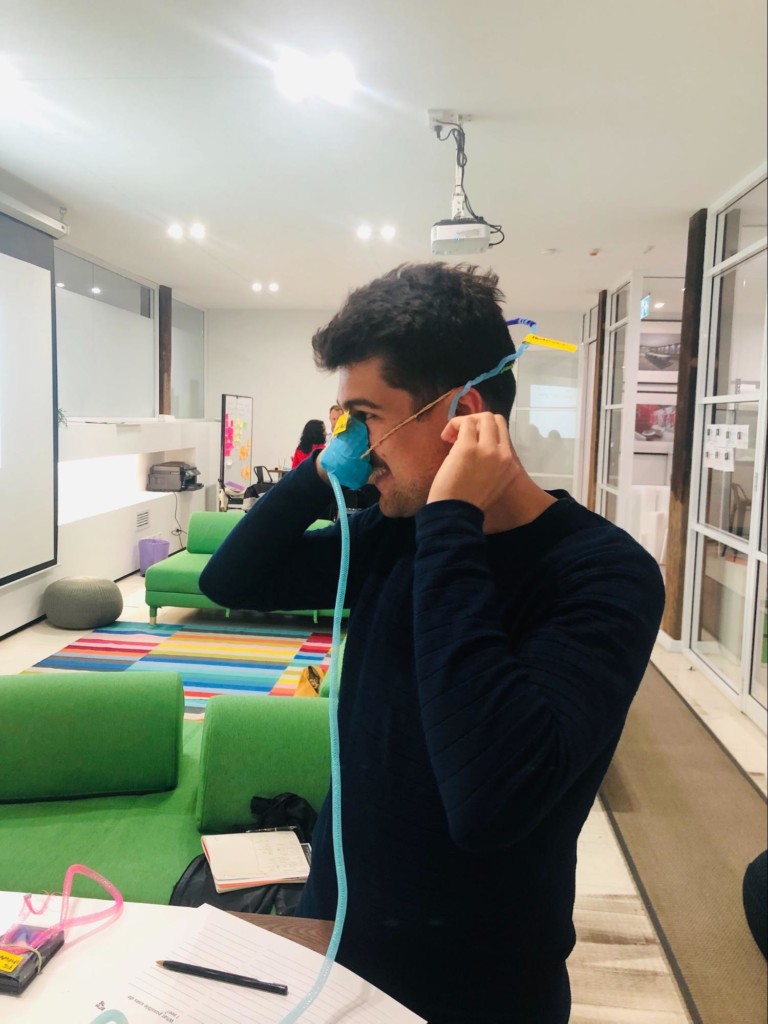 In action, during the prototyping stage.

Echos’ Designing Desirable Futures is a practical and hands-on course. We worked for real to design a better future, I had fun, played and got restless, but more than that, I had big takeaways through these profound lessons. I understood that the future might be possible, plausible and probable, but I can and want to design a desirable and better future for all of us.

Now I feel appropriately empowered to design my life, career, projects and enterprises. What about you? Would you rather predict or design the future?

*This article was adapted and edited by Rani Ghazzaoui Luke. 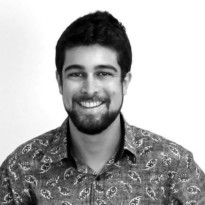 Yago Borba is an Economist that has experience in Sales Strategy, Inside Sales, CRM and Inbound Marketing, currently serving as Echos’ Sales Enablement.

Yago considers himself a ‘geek’ who has a passion for motorbiking and hip hop music, using these cultural references to create innovation.