Last week we traveled to San Francisco to attend the Singularity* Summit.

*For those who don’t know Singularity, they’re the ones who have been leading the thought and mindset for exponentially.

Singularity University in their own words believes that our world has the people, technology, and resources to solve any problem, even humanity’s most urgent, persistent challenges.

As a catalyst for global change, Singularity helps others leverage rapidly accelerating technologies—including artificial intelligence, nanotechnology, robotics, and digital biology—in innovative ways to unlock solutions that can positively impact a billion of lives. Organisations such as Google and Nasa are the co-sponsors of the university, so you can imagine how intrinsically related to technology and futurism they are.

There were 1600 participants from all around the world, and believe it or not, the biggest delegation came from Brazil. (As you probably know, we are a global innovation lab born in Brazil)

During three days we were immersed in exponential technologies and the experimental spirit of the Silicon Valley.

Here are our biggest learnings from it:

With the advance of technology, our reach is becoming more powerful and our possibilities to change and transformation easier and faster. There’s almost no more limitation in what we can do and what we can create change.

* An important point to make is to distinguish what is innovation and what is a disruption. 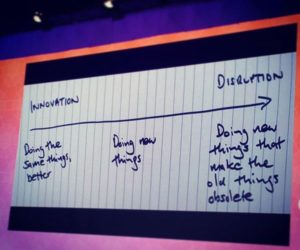 Whenever we’re creating disruptive change, we need to understand that there’s a roadmap to a brighter future. It’s important to create the steps until the big systemic change.
(Roadmap to a bright future)

– Artificial intelligence is going from intentionality to application, and this is huge!
– There’s an explosion of networks. It means that we’re even more connected and faster. There are 5 billions of minds coming online in the next years.
– There’s an explosion of sensors. With more sensor, we have more knowledge. We will know anything, anytime, anywhere.
– We’re getting more intimate with technology. From computers to wearables and now to “insidables.” We’re going to have technology inside our bodies that will connect our brains and minds with the internet.

4. “The intelligence of technology is part of who we are”- Ray Kurzweil – Futurist and Singularity Founder

Technologies like artificial intelligence are part of who we are. It’s an extension of our body and minds to makes us smarter. We’re the only species on the planet that can create tools. This is what we do. Technologies like AI are amplifying intelligence like we already amplified our human body skills such as swimming and flying. Technologies like blockchain are helping us deal with more complex challenges in a more distributed way.

Technology is an extension of humans and as such can be used for good and bad. At the same time, optimism is the only way to move forward.

Leaders can’t change one thing without changing everything. That is the innovator’s dilemma*. When you’re creating change, you need to do everything to change one thing.
*There’s also a book about it. The Innovator’s Dilemma: When New Technologies Cause Great Firms to Fail, generally referred to as The Innovator’s Dilemma, first published in 1997, is the most well-known work of the Harvard professor and businessman Clayton Christensen.

Transformation challenge that is driven in a top-down direction has high rates of failure because organisations have an immune system that reacts to change. Finding an edge to the existing business has the potential to seal what can become a new core.

6. Digitization is the essence of modularity. Before what was the previous analog becomes digitized and then can become exponential.

7. The density of connection, technology, talent and openness to experimentation is vital to evolution.

During the three days at Singularity Summit, we’ve met and interacted with the most amazing individuals, technologists, futurists, and entrepreneurs. What makes Silicon Valley great is not the access to money and technology but to the amount of talent that is attracted to this place. To succeed in the exponential era, surround yourself with these three factors: talent, technology, and openness to experimentation.