Last year I attended an Adobe Artificial Intelligence debate, that was part of Sydney’s Vivid Festival. The posed question that night was: does creativity require humanity?

At the beginning of that night, approximately 60% of the attendees voted in favour of creativity being, indeed, a human trait. I was included in that group. Two hours, and many speakers later, tables seemed to have turned with 20% of the “yes” voters migrating towards the negative answer. Some of the “against” speakers had very compelling arguments to explain why creativity and humanity did not, necessarily, walk hand in hand. It seemed creativity did not require humanity after all.

It is one year later and I am still not a turncoat. The “20% shifters” didn’t represent me then and they do not represent me now, but the debate got me thinking and I found myself in some sort of intellectual limbo, without a  clue of where I stood.

The reason why I have a hard time identifying with either of the answers is that I don’t believe this to be a “yes or no” type of question. Machine learning has proven that machines can definitely be creative, but nothing a computer has done so far compares to the innovative resilience that made human evolution – and our very existence – possible (here is a great article that speaks on humanity, creativity and evolution).

Technology is capable of solving problems that humans haven’t even recognised as issues yet. This capability, technically, classifies machines as creative “beings”. The thing is, machines are not beings. Machines are created by beings, programmed by beings and used by beings, but they have no sense of self, which means their creativity is superfluous, at least from their own perspective.

If both machines and humans innovate to serve a human purpose, is it fair to say that creativity only exists in a context where it is appreciated for what it means? Can humans claim creativity simply because they are capable of recognising their own power of creation?

The notion of creativity as we know it, which by definition means “the use of imagination or original ideas to create something; inventiveness.” is human-made; machines have data, not imagination. Nevertheless, it is undeniable that creativity has become a collaborative experience between homo sapiens and machine. What differs one type of creation to the other is a combination of semantics and feeling: humans understand what creativity means, not only literally, but also in the context of their lives. Bots, on the other hand, for not having the capacity to care, simply serve as vessels that help amplify the power of human creation. 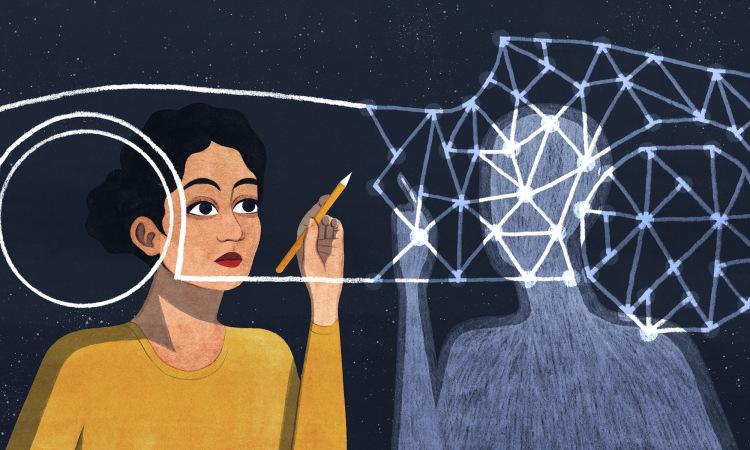 Design thinkers say that creativity only becomes innovation when the end result adds value to people’s lives. In one of its most creative moments, Facebook’s AI created a language of their own and, although innovative, that creativity did not add value to anyone’s lives, in fact, if anything, it only served to make people a little more uncomfortable about how artificial intelligence can be used.

If the human notion of creativity was explained by an Aristotelian syllogism, I think it would go like this:

The perception of creativity requires a sense of self.

Machines have no self.

It is not that machines can’t be creative, it is just that machine creativity when out of context, is irrelevant. The syllogism maybe silly and, perhaps, not completely accurate, but the fact that humans need innovation as a tool for survival, whilst machines do not, is.

Answering if machines can be creative is nonsense, it doesn’t matter. Creativity does not leave us when it inhabits them. Hence, my new proposed question: Is creativity a human creation? Isn’t everything else (besides nature)?

In this tiny blue sphere that we call home, having complete awareness of our insignificance before the infinite universe, creativity – this mindset that allows everything unnatural to exist – is ours to claim as it is to share, after all, there is plenty to go around.