ContactEchos Online
Echos > desired, the blog > Business Design > How To Conduct Research About The Future
2021, April 10

How do we uncover what may be possible in the future? With research. Research is defined as a systematic investigation into materials and sources to establish new facts and reach new conclusions about a topic.  The tricky part of applying the process of research to the future is there are no known facts about the future and therefore it is not possible to draw concrete conclusions. And yet futurists not only routinely conduct research, but they also discover a range of versions of possible futures based on their findings.

Celina Strzelecka, from the Department of Ethnology and Cultural Anthropology at the University of Wroclaw says, “The past, present and future are directly related. As people are not able to experience the future, they are forced to understand the concept of future on the basis of the remaining time concepts – present (that is directly experienced) and past (that is known through sensual memory).”

Strzelecka calls the process of studying and researching the future, Anticipatory Anthropology. This process allows future researchers to discover new information about the future through developing different alternative stories or scenarios about the future. They then evaluate the social and cultural system in the story to understand how people will react in these possible future situations. In other words, testing how people might react to future events based on what we know about people and cultures now.

Speculating or anticipating how people in the future might react to events, products or services is a critical part of conducting future research. It helps us to uncover what is possible by moving us away from thinking about what is happening right now or in the past. It creates new scenarios of the future and then speculates on the new possibilities each of them contains. It is not about uncovering facts, it is about discovering what is possible. At Echos we employ four different models to conduct research about the future. The following processes below explore not only how to conduct this research, but how to make speculations about new possibilities for our futures. 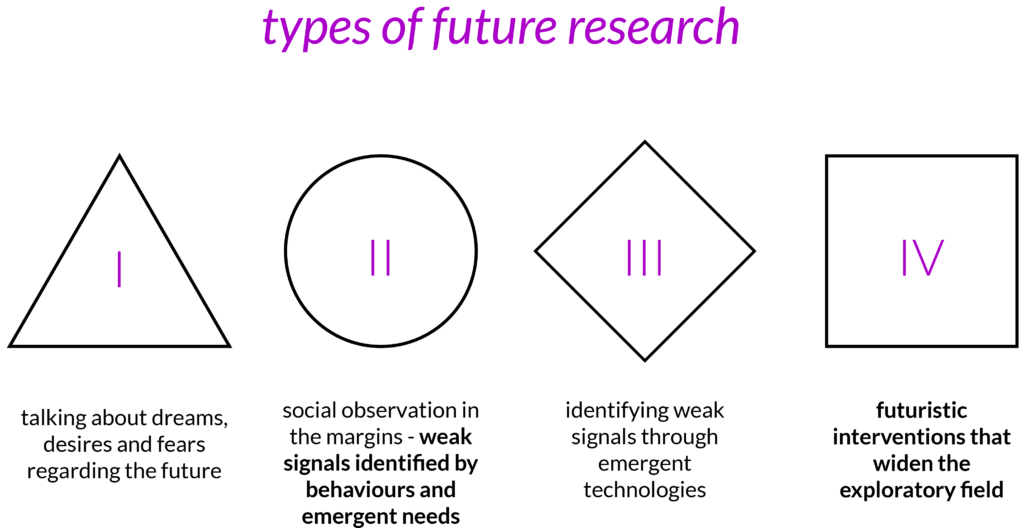 Talking About Dreams and Desires

How do you uncover people’s fears, dreams and desires about the future? The best process is to simply ask them. At Echos we conduct empathetic research through conversational experiments. We use prompts to elicit conversation. This can be with images, questions or statements as ways to uncover their thoughts and feelings about their dreams of the future.

For example a great way to think about this is a set of questions printed on cards. These could be anything from statements in fill in the blank style structures to gather feelings or questions about what they would like to see in the future. The important thing is that the questions are open and allow people to share their honest thoughts and emotions.

Fill in the blank style statements work well. An example could be ‘In the future I would like to see more of ________________ in my city. The reason why is _____________________.” The conversations captured through this process opens the doors on what people are feeling now and how that might relate to future events in their city.

Social Observation In The Margins

The next type of research is social observation in the margins. This refers to watching people who exist outside of the norm. They typically live in the fringes of societies, and are embracing new trends in their ways of living.

This observation can be done in a variety of ways, for example, going through social media posts, reading news from specific fringe locations and identifying new emerging technology trends. This can also be done through conducting interviews with specialists who are working in exciting new fields or technologies. The key here is to remember to observe, listen and speak to people who are not living a mainstream life style.

For a project in Sao Paulo on the future of urban life in the city, the team at Echos visited an illegal squat where artists and other fringe dwellers lived in a communal way. They shared their visions, hopes and fears about the future through interviews. Because they lived at the margins of mainstream society their views were very different. This is critical for future research because the edges often contain interesting trends about what could or will happen next. The trick to finding these obscure signals is to look where no one else is looking. This means a researcher must get creative and the wealth of what can be discovered could lead whole new ways of seeing the future.

Understanding the behavior of people who are living with and using emerging technologies is important because they are early adopters of what could be coming next. New technologies are also tied to economic trends that could become influential in the future. A window into how and why people are spending money on these new technologies provides insights into emergent needs. As they spend on technologies in new and interesting ways their emerging needs are exposed. This provides clues to how people will respond to these trends if they increase in importance in the future.

As researchers it is also important to look into the human behaviors behind the needs. What new social needs are now visible? What are the emerging technologies that they are using or not using? Asking these questions helps researchers discover new patterns of human behaviour. Being able to identify recurring patterns allows us to make educated guesses, assumptions, and hypotheses; it helps to develop important skills of critical thinking and logic about what is possible in the future.

There may be multiple patterns identified, this is good because it allows a researcher to create multiple scenarios or stories about the future based on them. An example is looking at the continued use of bitcoin and how it might disrupt the current banking systems. There are many extremes of how people use bitcoin. Some use them to make purchases and others invest in them for returns. Within those two human behaviours there are similarities in the patterns. Both groups have assigned value to bitcoin, much like they would any other currency. They both believe it has value in a larger ecosystem of marketplaces and commerce. Looking into the human need of new currencies allows a researcher to go deeper into any patterns they can identify.

A future intervention is an investigation that uses objects or artifacts as representation of a future. These artifacts from the future are called provotypes. A traditional design prototype and provo-type, are very similar. The difference is a prototype is created to test a concept to receive feedback, a provo-type is to provoke conversations about the future.

A provo-type must be presented as an actual object from the future. The object must be provocative enough that it creates conversations about the hopes, dreams and fears about the future from the people who interact with it. It can be as sophisticated as a working object such as a drone or as simple as a story about the future on a poster on the wall. The main objective with this process is to understand people’s feelings about the future. What does it provoke in them?

We used provotypes in our project to design the future of urban life in Sao Paulo. We canvassed the streets with posters asking, ‘What do you think about the future of urban life?’ People began interacting with us based on these posters. Our team was able to interview individuals and schedule follow ups to go deeper into some of their ideas. An example of a more sophisticated provo-type is a short film showing a detailed version of a future scenario. As long as the process gets people to thinking about their feelings of that prospective future and then talking about them the process is a successful research tool. It can be anything as long as it provokes them to think and share.

Ready To Speculate About The Future?

Thinking, speculating and experimenting with possible futures is not a simple task and yet not impossible. The first step is finding the right research method. The second is to locate the right people to test it on and last to start developing new scenarios based on the learnings.

If we approach the future with the mind of a researcher, there is no limit to what we can learn and what new possibilities are available to us. Learn more about our Design Futures Experience here. 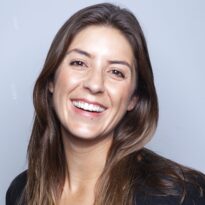 Juliana Proserpio is an entrepreneur and educator. She is the Co-Founder and Chief Design Officer of ECHOS, an innovation lab and its business units: Echos – School of Design Thinking – a school that puts innovation in practice, and Echos – innovation projects. Over the last 10
years, Juliana has worked to develop an innovation ecosystem in Australia, Brazil, and recently in Portugal to foster the power of design for desirable futures.
She has more than 10.000 hours working closely with clients on facilitation design, leading a diverse range of projects in industries such as healthcare, finance, education, retail, new, technology and consumer goods.
Juliana speaks on the power of design to create desirable futures. She spoke at events such as the Global Innovation Summit in San Jose, California, TEDxMaua in Sao Paulo, Brazil, What Design Can Do and the Sydney Design Festival.